If you had a choice of your perfect holiday or second-home destination, would it be by the water’s edge or with a mountain view?

It’s a familiar dilemma for many and is often the source of disagreement within a family
“I love the mountains, but my wife/husband/kids love sailing/water sports”.

Happily, for us in Europe there are options to satisfy both requirements and one country – Switzerland – is blessed with some of the best choices for a lakeside home in the mountains.

Read on for a brief selection of the finest lakes in Switzerland for overall lifestyle, and Swiss lakeside property available for sale to non-Swiss residents.
Or Click on a button below to go straight to that section

The majestic Lac Léman is the most famous lake in Switzerland and one of Europe’s largest freshwater lakes. Its 580km2 straddle two countries with 60% located in Switzerland and 40% in France. Famous towns with their origins as far back as Roman times can be found around the lake such as Geneva, Lausanne, Vevey, Montreux on the northern shore and the spa towns of Evian-les-Bains and Thonon-les-Bains on the French southern shore.

The lake has attracted artists, writers and poets such as Turner, Tolstoy, Rousseau and Lord Byron, composers such as Tchaikovsky and Stravinsky, musicians (the Montreux Jazz Festival is one of the most famous in the world) such as Freddie Mercury, actors such as David Niven, Audrey Hepburn and Charlie Chaplin and sports stars. The area is home to over 200 international federations including The Red Cross, the European headquarters of the United Nations, the World Health Organisation, The International Olympic Committee and football’s UEFA.

The lake’s water temperature is high enough for swimming from June to September and the lake has 116 public beaches. The Aquaparc’s pools and slides are popular with families. Pleasure boats and passenger ferries stop from town to town and private motorboats can be hired. Canoeing, kayaking, windsurfing, paddle boarding and water skiing are some of the active water pursuits available. The world’s longest non-stop rowing regatta, the Tour du Lac, sees competitors row once around the lake’s 160 kilometres.

Golfers will love the selection of golf courses available within a short drive. It is possible to cycle around the lake on marked cycle routes or quiet roads. Walkers can enjoy gentle strolls through the well-maintained waterfronts, such as at Montreux, dropping in to the outdoor cafés for refreshments. Excellent public transport makes it easy to visit the small villages along the lakeshore.

The UNESCO World Cultural Heritage vineyards of Lavaux, are excellent for hiking on paved roads with fantastic views of the mountains and lake. More adventurous walkers can venture into the Chablais Alps to the South of the lake or the Vaudois Alps to the east for mountain trails.

Famous ski resorts such as Villars-sur-Ollon, Leysin, Champery/Portes du Soleil, Verbier/4 Valleys and Gstaad are all within one hour by car.

Due to its climate, beauty and central European location, Lake Geneva is considered one of Europe’s most prestigious property and lifestyle destinations. Numerous villas dot the lakeside, some with their own harbours and berths. Property values are very high and non-resident Swiss are restricted in what they can purchase. Alpine Property Search is offering for sale to Swiss residents and non-residents luxury apartments overlooking the lake in the UNESCO World Heritage area of Lavaux, famous for its steeply terraced vineyards, green pastures and pretty villages.

Contact Us for Details of Our Selection of Lake Geneva Properties 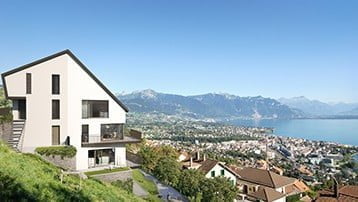 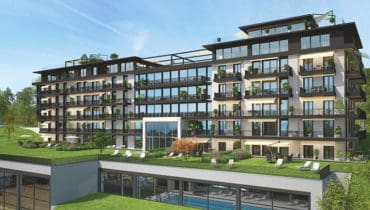 Lake Lucerne is the fourth largest lake in Switzerland covering 114km2 and sits proudly in the centre of the country. Known in German as Vierwaldstättersee and in French as Lac des Quatre-Cantons, it is bordered by three of the original cantons that formed the Swiss Confederation in the year 1291 – Uri, Schwyz and Unterwalden (now split into Nidwalden and Obwalden) as well as the canton of Lucerne.

The steep mountains around the lake give it a fjord-like appearance and rise to 2000 metres in parts. The most famous are Mount Pilatus (2132m) and Mount Rigi (1797m), both of which can be accessed by cable car and cogwheel railway. Indeed, Mount Pilatus also boasts the steepest cogwheel railway in the world, built in 1889 at a gradient of 48 percent. Over 70 mountain peaks and numerous lakes can be viewed from its summit. Another world first is the cable car up to the Stanserhorn (1850m), the world’s first double decker cable car with an open upper deck. Much more exciting, and healthy than an open bus tour in a polluted city!

Numerous pretty villages and towns skirt the lakeshore, such as Weggis and Vitznau. The town of Lucerne, on the lake’s north-western corner, is a popular tourist destination with its picturesque squares, churches and most famously, its medieval covered wooden Chapel Bridge.

Naturally the area’s main attraction is the lake, with boats of all kinds dotting its clear waters. Paddle steamers, motor and sailing boats make their way to and from the many ports and harbours around the lake. Lake Lucerne’s thermal wind conditions are ideal for sailing and a famous regatta, the Vierwaldstättersee Cup is organised on the lake in which both experienced racers and newcomers can take part and experience its exhilarating natural beauty. Swimmers can enjoy the lidos, inlets and open water.

For those who prefer terra firma there are numerous cycling and walking paths. The largest summer & winter holiday destination in Central Switzerland is Engelberg (1050m to 3020m) which is 25kms from Lucerne. Famous for its monastery which was founded in 1120 and is still occupied by Benedictine monks and dominated by Mount Titlis and its glacier at 3,239m, it is a summer playground with 500km of hiking trails. Other activities include biking, golf and the summer toboggan and adventure playground are hugely popular with families.

Engelberg is one of the top 10 winter sports regions in Switzerland and the largest in central Switzerland with 82km of slopes for skiers and downhill skiers. There are also 35km of cross country skiing and 53km of signposted winter hiking trails. Why not try the 3 sledging runs with a total length of 7km?

Non-resident Swiss may purchase holiday homes in the southern areas of the lake that fall within the cantons of Obwalden and Nidwalden. Pretty shoreline towns with properties for sale to non-Swiss residents include Stansstad, Ennetburgen and Hergiswil.

Contact Us for Details of Our Selection of Lake Lucerne Properties

In the heart of the world-famous Bernese Oberland, Lake Brienz’s distinctive turquoise colour is due to the minerals in its glacial water. Covering 29.8km2 and 14km long, it is fed by the river Aare in the east which flows through a canal at the cosmopolitan town of Interlaken at its western point and into neighbouring Lake Thun. Known as the gateway to the Jungfrau region, its spectacular views of the Jungfrau mountain range have made it a popular tourist destination since the 19th century.  Its hotels, restaurants, shops and cafés can easily be accessed via the regular boat services connecting the lake’s towns and pretty villages.

The village of Brienz sits on the lake’s northern shore at its eastern end. Its lakeside promenade is car free and you can meander through its little parks and linger in its cafés and restaurants enjoying the views. All of which makes Lake Brienz an increasingly attractive lifestyle destination.

This is a water lover’s paradise. Numerous natural lidos and swimming areas can be found along its shoreline. There is less sailing on Lake Brienz than on Lake Lucerne so most of the boating is via paddle steamer or motor boat. This makes it very popular with water skiers and wake boarders. You will also see rowers, kayakers, paddle boarders and windsurfers making the most of the lake.

What better way to soak in the amazing scenery than cycling around the lake and taking a boat home? Pack a picnic and take a swim at the same time.

Numerous hiking trails snake up from the valley floor, passing through forests and by stunning waterfalls such as the Reichenbach Falls. Its fall of roughly 820 ft makes it one of the highest and largest in the Alps.

Switzerland’s oldest steam rack railway, the Brienz-Rothorn railway, dates from 1892 and still puffs you up to the 2244 metre summit through villages, tunnels and high mountain pastures.

It is really unusual to find local skiing and cross-country routes by a lake, yet Lake Brienz has a direct connection from the village of Meiringen on the eastern side of the lake straight up to the Meiringen-Hasliberg ski area. The skiing is between 1,055 and 2,433m and there are 64km of runs with 25 pistes to suit all abilities. There are also 8km of cross-country ski routes as well as a terrain park for snowboarders.

The world-famous ski resorts of Wengen, Murren and Grindelwald are all easily accessible by car from the lake making Lake Brienz an attractive dual-season property destination.

The lakeside area is subject to strict development laws and property for sale is hard to come by. The Florens Resort on the lakeshore at Oberied is an exciting new development with its own harbour, swimming pools, wellness centre and restaurants. Freehold properties are available for non-Swiss residents. A rental programme through the resort’s management company is a stipulation of purchase.

Contact Us for Details of Our Selection of Lake Brienz Properties
Sorry, no posts matched your criteria.